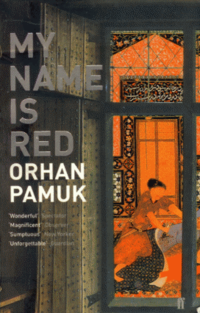 Books I am reading

I just finished reading 'Istanbul: Memories of a City' by the Nobel Prize-winning Orhan Pamuk, 'Modesty Blaise' by Peter O'Donnell and 'Football and Gangsters: How organised crime controls the beautiful game' by Graham Johnson.

I had bought 'Istanbul' in 2005 before he won the Nobel Prize. Before I had managed to get around to reading the book, the pages had turned yellow with spots! Books would not survive well in the humidity here, acid-free paper or otherwise. A pity.

I am currently reading 'My Name is Red' by Orhan Pamuk, 'Ancient Rome' (a compiled and edited volume) and 'Out of Eden: The Peopling of the World' by Stephen Oppenheimer. I have Pamuk's 'The White Castle' lying around somewhere. I have been meaning to read 'Captain Alatriste' by Arturo Perez-Reverte soon.

What are you reading? I guess it is a perennial question that I ask my friends.
Posted by Chuang Shyue Chou at 9:05 pm

Email ThisBlogThis!Share to TwitterShare to FacebookShare to Pinterest
Labels: Books

Ah Mr. Marlboro, your blog posting has drawn me to comment!

I’m currently not reading a novel but rather a series of comic books. Have you ever indulged in that particular medium? It is an amusing series called “Cable and Deadpool” produced by Marvel comics. Deadpool is a real character I can assure you! Full of witty pop-culture remarks and constantly breaking the “third wall” as if he knew he is just a comic book character in a fictional universe.

Before that I read several books including Phantom by Terry Goodkind (intriguing fantasy series that in my opinion has become a bit stale), and World War Z (Ah yes Mr. Marlboro! A zombie book telling the stories of those that survived the Zombie war!

I think after I have read the last of these comic books I will try and pick up “Snowcrash” by Neal Stephenson. I hear that it is a staple of the Cyberpunk genre and I’ve only been exposed to the lackluster “Neuromancer” series. I’m hoping Snowcrash will please me more.

What am I reading? Tipping Point - Malcolm Gladwell =P

My friends kept raving about it that I got fedup and bought it. Haha

Nimitz and His Admirals
- Personal studies of Nimitz, Halsey & Spruance's actions + some of the other major US players.

And I Was There
- Revelations by Pac Fleet Intelligence Officer regarding intelligence triumphs and political failures that affected outcome of PH, Midway etc.

Eagerly awaiting the next 'Culture' novel by Iain M Banks...