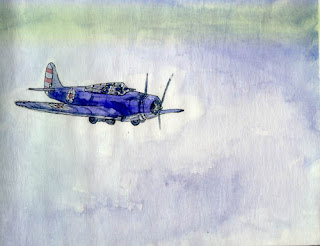 The Devastator torpedo bombers valiently attacked the Imperial Japanese Navy at Midway, sacrificing themselves in an attempt to sink the Japanese aircraft carriers. After that action where the majority of the aircraft were wiped out, the Grumman Avenger torpedo bombers became the mainstay of the US Navy.

This little sketch is a tribute to those brave men who defied the Imperial Japanese Navy and paving the way to eventual victory.
Posted by Chuang Shyue Chou at 11:01 am

Email ThisBlogThis!Share to TwitterShare to FacebookShare to Pinterest
Labels: Art