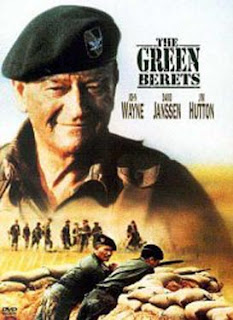 I first watched the John Wayne directed and starred film, 'The Green Berets', over two decades ago and it left little impression except that of a rotund man scrolling around in a beret then. I was watching it again just now. 'The Green Berets' was based on a book by Robin Moore who had also wrote 'The French Connection' which formed the basis of an Oscar winning film.

I had a few thoughts of this clumsily directed patriotic film. Firstly, the script and the dialogue felt extremely artificial. It was as if the main characters were in a bad Western. Granted that a lot of the special forces type did and do come from the south, the dialogue here was simply laughable. I guessed it was just old-fashioned in its approach.

Like Mel Gibson directed 'We were Soldiers', the countryside did not felt tropical at all. Even if it were meant to protray the Central highlands, there should not be orange foliage which was the sign of autumn and that of a temperate forest. Later, I discovered that a lot of the movie was directed in Fort Benning, Georgia.

The orientals in the movie, including the Vietnamese and Montegnards, spoke like book oriental villains of the 1930s comic book variety, a kind of Fu Manchu-cum-Charlie Chan. Each time they spoke or the Montegnard child appear, there would be accompaniment of some pseudo-oriental music.

The scenes of the UH-1 helicopters were not bad at all, as were the protrayal of the small arms used. The explosions in the film felt artificial too. One last note, the movie was made in 1968, during the height of the Vietnam War and was thus contemporary.
Posted by Chuang Shyue Chou at 9:51 pm

Email ThisBlogThis!Share to TwitterShare to FacebookShare to Pinterest
Labels: Film

Truly one of THE WORST John Wayne films ever! Watch "The Searchers" if you want to see the best...

I can imagine, Tim. It was truly atrocious.

And the song at the end credits. Noooo...